Tips for breaking down old clips 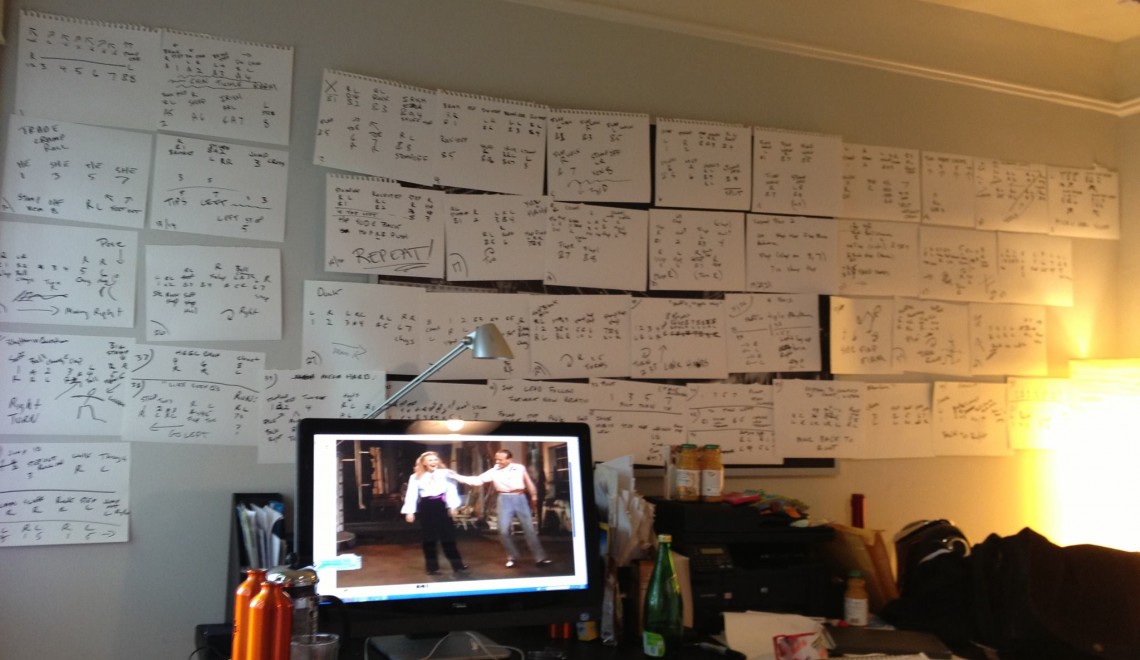 Have you ever found an old video clip that you wanted to recreate, or just learn something from? Have you ever wondered where teachers get their ingenuity to present new material year after year? Are you looking for a new source of inspiration to set you apart from the other dancers in a competitive setting? Primary source analysis is what you’re looking for. This is the process of finding a historical piece of footage, and analyzing it to get historical information and fresh ideas.

Even pieces like the Big Apple that have been broken down countless times are still wellsprings of new ideas. You just have to look closely enough.  You don’t need to break down an entire song, just a few 8-counts is great, but for this blog I’ll show how I pull apart a whole routine.

It can be a daunting process, but over the years I’ve come up with a few methods that can greatly improve your efficiency in breaking something down, and get you to the important part: putting new movements into your body and new perspectives into your mind.

In my most recent completed breakdown, I wanted to study Fred and Ginger’s Bouncing the Blues from the Barkley’s of Broadway.

After watching the clip 10-20 times, I was pretty intimidated. The rhythms were fast and complex, and to top it off, the sound is often recorded separately from the visuals in these old films so there is sometimes some disparity between what I would see and what I would hear.

So to begin, I processed my file with ClipConverter.cc and opened up my freshly downloaded media file into three windows:

I could switch from window to window and quickly get three different perspectives. This images shows another fantastic clip I’ve been working on, but with the same idea – one player for each speed. 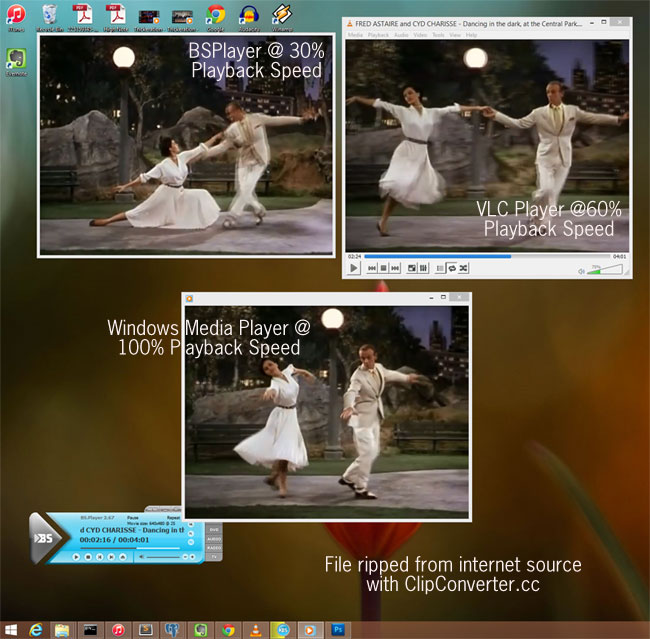 Stage 1: What are we dealing with here, in terms of 8s? 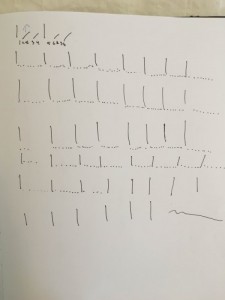 I like to draw out the entire song, with a vertical line for each eight count. It can give you insight into the structure, and later it’ll give you starting and stopping points so you can practice in chunks. 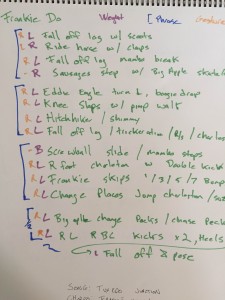 There are other options of course, like this example of one line per phrase, which is more of a way to nudge my mind when trying to memorize the order of movements.

You’ll see here that I point out what foot the weight is on and what foot is doing the “gestural” work.

Stage 2: 8 count by 8 count, what rhythms are the feet creating?

This is where I’ll use a sheet of paper for each 8 count. I write what I see in big sharpie, then I paste it on the wall. That way I can memorize the routine by dancing it out while I read the routine off the wall. 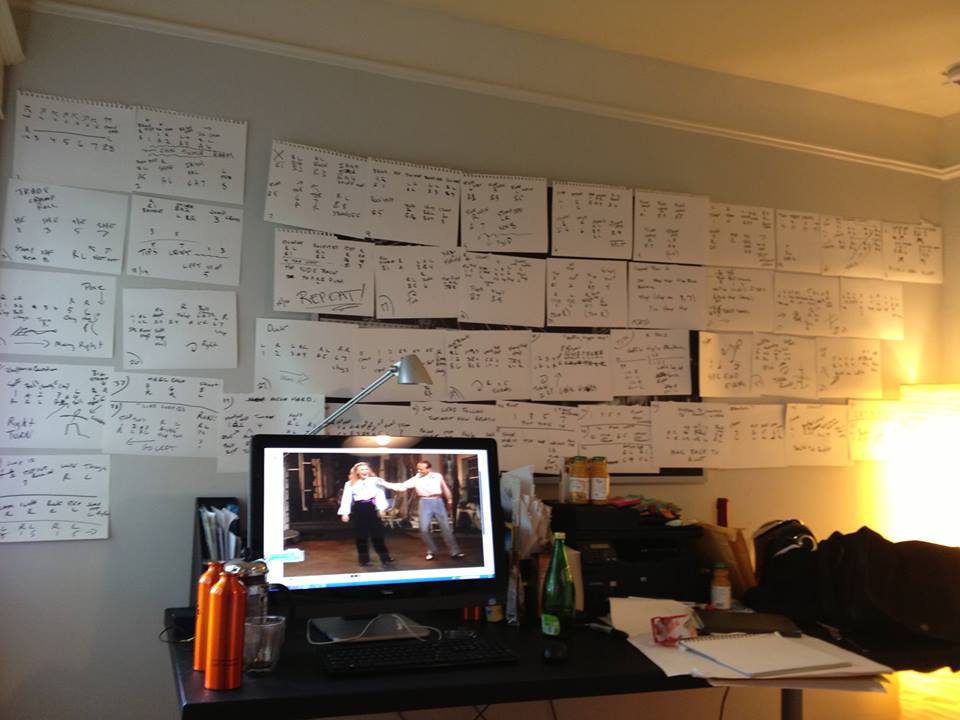 This is a tap routine, so it was pretty complicated.  By using these large sheets of paper taped to the wall, my memorization time was reduced by quite a bit. 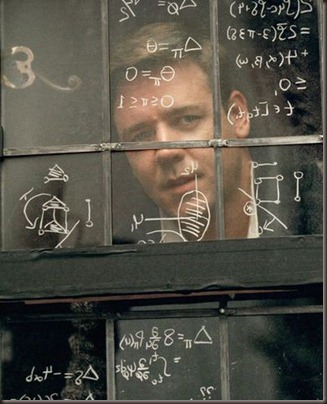 After I have the footwork down, I look at stage usage, energy, hands, arms, and heads. This is where you can really learn something about how you use your body, and how other dancers use theirs.

[blockquote]Cool thing:
At about 29 seconds into Bouncing the Blues, Fred Astaire does something really cool by expresses his arms in a similar way to the Charlestons in this clip.  Neato! [/blockquote]

One of my favorite things to do is compare differently influenced dancers come up with the same, or radically different final products.

This is where I really get to compare, contrast, try new things out, and build my personal skills.

An interesting aside is Labanotation, a way to notate and study movement.  There is also Kahnotation, Standard Tap Notation and many other disciplines.  Pick the one that matches the style of dance you are studying and the style of learning that best suits you, or make up your own.  My dance notebooks are filled with things that wouldn’t make sense to anyone but me, but they are specific references that help me recreate a clip or a class many years later.

This is the stage where you ask yourself what you’ve learned. What are you doing differently since you studied this clip? If you have the time, practice until you can recreate, then practice till you can improvise on your recreation. 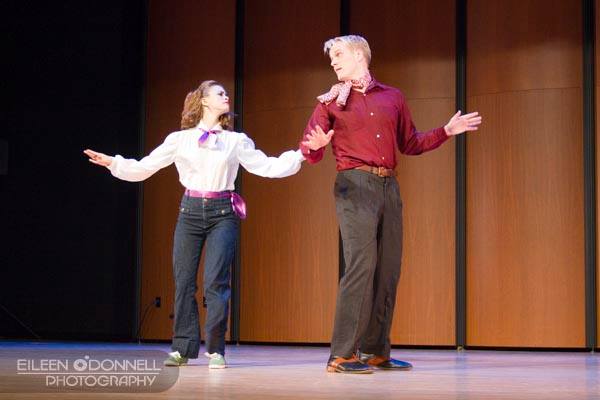 Stage 5: As a teacher, what did I learn than I can pass along?

One of my most influential teachers, Gene GeBauer, would teach me tap lessons every week. Not only would he show me steps but he’d tell me about historical context. He’d tell me about how he learned the routine we were working on or where he first saw it. Remember that even as a secondary source, your information about the routine or steps you are studying is an important part of the history.

Your students may want to know why you were drawn to that clip. They will develop their own ability to break down clips by you sharing your methods.

Without a doubt, you’ll look at the same things with different eyes later in your career, so plan to revisit, and revise what you’ve learned.

Hopefully this is a little insight into how I do research on dance clips.  If you have favorite methods or techniques, post them below!