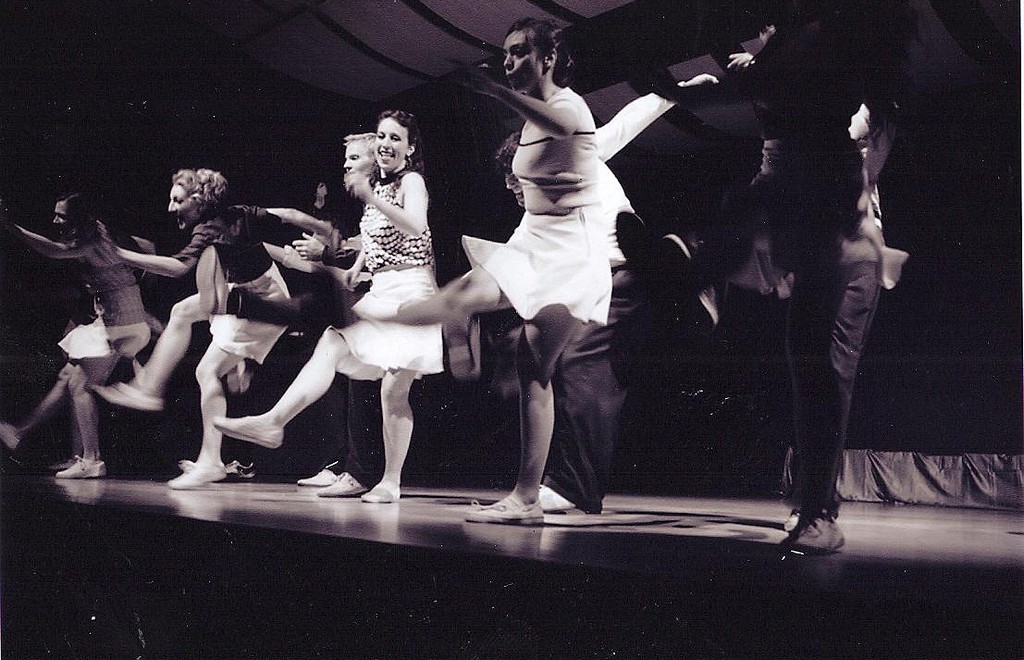 The Trankey Doo. Not just one of the best routines for punning about (Trankey did it, etc) it’s also one of the richest choreographies for movement and technique.

The story goes that it was originally choreographed to Tuxedo Junction, though most of the time today we see it to the Dipsy Doodle because this was the music superimposed onto the Spirit Moves documentary, after the fact. It was choreographed by Pepsi Bethel, who passed in 2002.

One amazing thing about the Trankey Doo is that it’s presented to the audience.  Let’s compare this to the Big Apple, done in a circle.  A circle is a shape which divides a plane into two spaces. That space which is inside, and that which is outside.  As an audience member, you are either in that space, or out of it.  The dancers of a Big Apple feel “in the space”, one of the reasons why it’s so much fun to do – you’re sharing an experience. It’s also a reason that it can feel less than effective to the audience.

In the Trankey Doo, the dancers face the audience.  There are some really visually appealing and dynamic moves too.  Almost every single move can move significantly forward or backward, giving depth to your piece.  This front to back movement is one of the most important things you can use as a team and as a choreographer to create visual interest. You can offset lines, moving some dancers forward while moving some dancers backwards. Dancers in the Trankey Doo interact with linked arms and other very unique interactions that aren’t seen in other jazz dances.

Now, understand that for me the point of learning these classic routines is not to do them as they were done back in the day, but to use them as a tool to create a common vocabulary, and as a jumping off point for new variations.  Granted, you have to be able to reproduce the original before you can improvise on the form, but the point is to make new, unique pieces using the building blocks created during the swing era.  When you run short of time, then you can borrow longer sequences from the classic routines.

One of my favorite all time performances of the Trankey Doo, from Midwest Lindy Fest. Note the variations on the classic routine.

One of the Originals

Did you know that Frankie had his own version of the Trankey do?

A good example of a Choreography Mashup

Count by Count Breakdown by Dan and Tiff

Kelly and Freddie do a Killer breakdown here. Lots of good variations

When learning these long routines, you are teaching yourself and your team to remember long sequences, to be accurate and to speak the language of the dance. In addition, concentrate on keeping the rhythm in the movements and in the body.  Try out variations that accent the look, but don’t change the basic rhythm, or that give a neat surprise to the rhythm.

One thing that I’ve tried with a lot of success is having just a couple of members of the team dance the routine at a time while the other teammates watch. You can use this to practice performance technique.  Have those who are watching give feedback.  You will also be able to tell who truly knows the routine and who is just following along.