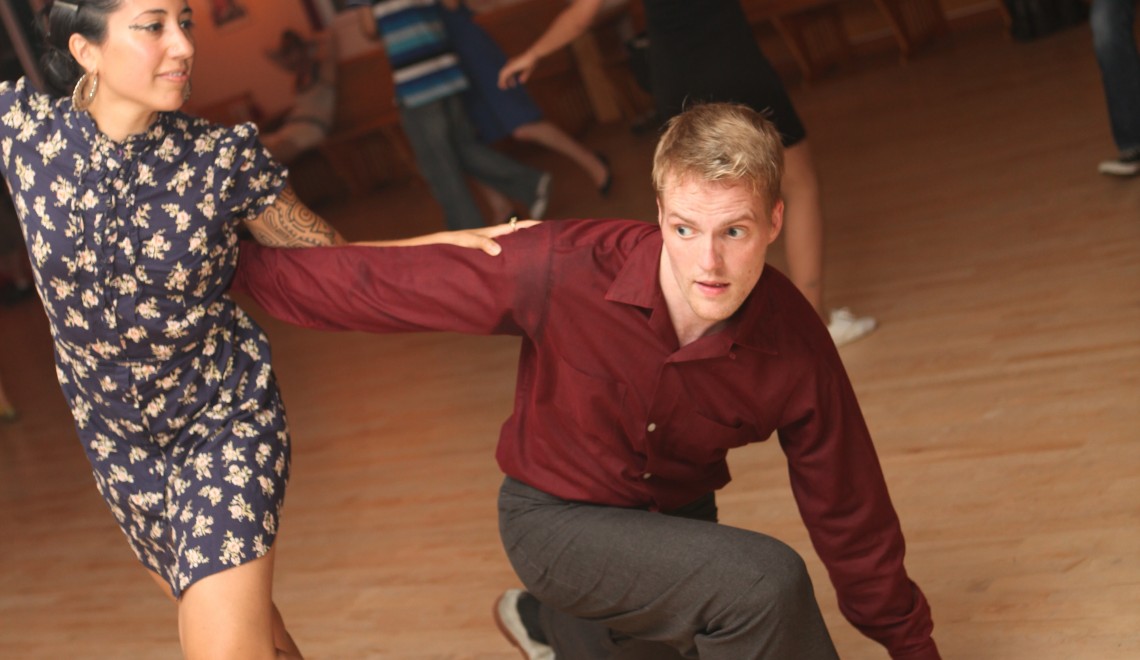 In our next installment, I’d like to talk about the California Routine. So named because it was invented at the time Whitey’s Lindy Hoppers were in California, this has been one of the most learned and performed Lindy Hop routines of all time. As you can also learn in the link to Bobby White’s blog below, it’s also one of the routines most subject to interpretation. Whichever version you choose, I’m going to point out a few things that a team can learn from this routine. It’s a “must know” in my book.

The historical aspect of the routine is important and somewhat relevant to anyone teaching a team full of people this choreography, however Bobby White covers this so excellently in his blog, Swungover, that I’ll just give you a link.

As a choreography, the California Routine is flashy, fun, perfect for a corporate gig, and great for a weeknight jam circle; the kind that inspire your new dancers to want to learn. It’ll give you, as a team, a context to learn two very common aerials, and you can do lots of things by modifying or stealing parts of it for other routines or compilations.

If you haven’t learned the routine, scroll down to check out a few of the resources available on YouTube for learning the choreography, then check out the notes below to see how I use this routine to develop teams.

In the beginning of the routine, we have 3 swingouts and a circle. I like to experiment with different angles (30 vs 45), and use this time to really dive into the swingouts on the team.  For instance, 30 degree angles look great with front-out swingouts, 45s look better with side and back swingouts.

Do basics over and over and check to make sure the team does not “drift” in a direction. Often, in our social dance basics we don’t anchor our count 6 enough (leads!) and basic swingouts move forward. Also, re-emphasizing linear basics will make the entire picture better. Arms are a big deal, and rather than doing the same thing, I say “do something big” and give some suggestions, but not necessarily dictate exact movements.

Other things I like to work on correct, etc:

The second phrase has 5 moves… the skip up, tuck turn, side pass, 6 count circle (the stop/reverse), and the throw out with crazy legs.

The things you can work on or correct in this phrase are:

The third phrase is the “Tango”, a couple of transition steps, and a Lindy Flip… or around the back… or “Supergirl” or the lamp-post… or whatever you call it. POINT: Learn to agree as a team what you will call your aerials. It’ll save you confusion and possibly injuries.

The Tango can be done many ways. Most notably you need to align arms (straight back, or cross body)… and aligning the jump (or slide), depending on how you do it.

The aerial, I’ll call it Lindy Flip, should take off 3 and land 7, for all members of the team. Or whatever counts you want to use (some people compress the rock step to & 1, this speeds it up.)… The point is to work like an orchestra together… everyone in sync as much as you can be, even if it means relearning the way you do some things.

One VERY handy tool you can use with aerials is to first align their take off and landing, but also align their high point. It’ll take a lot of repetition, but it’s fantastic for the team as a group to repeat aerials over and over. I have heard that Whitey’s Lindy Hoppers never “marked” aerials… they did the aerial every time they practiced. That’s a little intense for my tastes, but one trick I did learn is to have the follows call out at the top of aerials, and that way you can tell more quickly who needs to speed up, who needs to slow down, etc.

The last phrase is the most subject to interpretation. The slip-slops need LOTS of practice for any team, but after that, you can complete the balance of the routine in any way you like… with or without aerials, going into classic “on the back” exits, or going in to “the horses”. For my own purposes, I like to look to “Day at the Races” for inspiration on my Tandem Charlestons. The way they do their Tandem is fantastic: low, round, and smooth.

So, in short, there are many ways to do the California Routine… the important thing is that you, as a team, develop together; equalizing your ability levels, agreeing to execute certain moves in certain fashions, running your routines over and over again, and seeking a like-minded-ness that can only come with many sessions of work.

In case you have never encountered the California Routine, I leave you with a few videos concerning the history, execution, and variations in the routine.

On a related note, one thing I love to do with a team is to organize a video watching night. It’s important that everyone watches, and re-watches classic clips and it’s a fun exercise and bonding experience to watch them together. You’ll need beverages, snacks…the whole deal. Hellzapoppin, Groovie Movie, Day at The Races, The Spirit Moves, and of course throw some modern footage in there too… ILHC Invitational finals, favorite showcase routines, and everyone should share their favorite viral video, too.

To get you started, Bobby White’s California Routine Compilation

Dan and Lainey walk through the California Routine.

Learn with Patrick and Natsha

Kenny and Heather Demo with Counts

Next up, the Dean Collin’s Shim Sham!