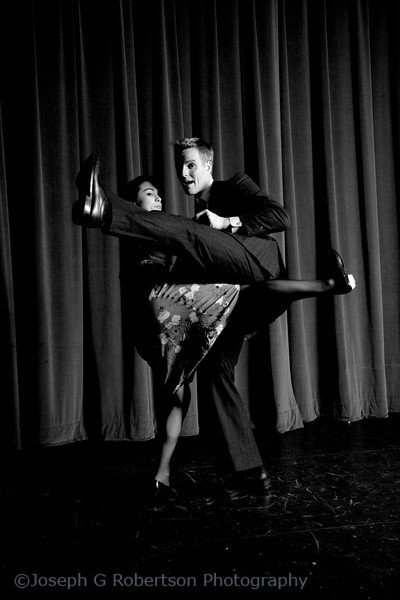 No amount of practice can truly prepare you for every performance. You’ll encounter technical glitches, sticky or slick floors, and most pertinent to this post, you’ll encounter a variety of floor sizes. When you perform at a gig or compete, you may or may not get to try out the floor ahead of time, so as a team, we need to have some simple, logical basis for creating and adjusting formations on the fly.

Let us learn a relatively simple routine. Frankie’s Lindy Chorus. No aerials to worry about, just clean transitions, solid jazz moves, lots of chances to “sell” the routine to the audience. Even if your team structure calls for regular partners, I recommend rotating while working this routine and the subsequent exercises. Team is about competing and performing, but it’s equally about creating a group of friends who share the experience of working on a team. Having a couple routines that can rotate partners will set a good example about what a team should be: Inclusive, versatile, friendly and social.

First, a few examples of the routine being performed. As a side note, I will say that you should find a song which is at your team’s ability level at first, then push the tempos only when the choreography is mastered. Pick a solid AABA format song (most common swing songs that do not have “Blues” in the title): Wednesday Night Hop, Flyin’ Home, Jumpin at the Woodside, etc.

Dan and Lainey counting through the routine:

Now that we have a routine to practice, lets run the routine and work on these concepts:

What is a line?

This is not a deep philosophical question, but rather one of standards. One person’s concept of being in a line is different than another person’s. For purposes of swing teams, I have a few ideas. First, the slower the tempo of whatever we’re doing, the better I think that formation should be. Obviously higher tempos will require a larger tolerance for deviation. (*side note, have leads agree on kicks or rock steps, follows agree on a rock step or swivels)

Second, for me a line formation is defined by lead’s toes being in an exact line. Not the mid-foot or heel of one lead’s foot lined up to another’s toes. If you are a stickler, this will become automatic later on. In a swing team, follows can help maintain formation… but I think of it as primarily being lead’s responsibility… Good Lindy Hop means the follows are concentrating on rocking the swivels, turning (which is an inherently difficult time to think about formations), and engaging with the audience.

Third, on the note of being a stickler, it is the duty of each team member to make the effort to maintain the line. Any team member can call “line” to draw attention to a mis-formed line (as long as they aren’t doing it to be shaming or self-righteous or just a regular garden variety jerk), all team members should feel empowered to casually call “line!” while doing a run-through. The only exception is perhaps during the very initial learning stages, where maintaining a line might be overwhelming.

Last, formation is only an arbitrary percentage of the total package. If you are spending so much energy thinking about a formation that it’s affecting the overall energy of your dance, you either need to spend some time outside of practice working on the choreography, or loosen the standard a touch.

A good team is like an orchestra; each team member must play their part.

When to fix it?

A good exercise for a team is to make a line or two, and do swing outs. On the counts 3 and 5, practice looking down the line to match one person in the middle (known as the Line Leader, more on this later). It’s nice if the line leader is a consistent, solid dancer.

Different tempos are going to affect this differently, so try a spectrum. One very common problem is the line consistently drifting, due to lack of a solid “6” anchor on the lead’s part.

Each line must have a Line Leader. With just swing outs, it’s fairly easy. Throw some circles, skip ups, etc into the mix and your lines will have an upstage/downstage movement that is ideally dynamic. (For you graphics people out there think vector, not raster). Elect a Line Leader and run the Lindy Chorus with large movements backward on the circles and large forward movement on the double-turns forward. Have the dancers in the group watch the Line Leader on 3 and 5 and maintain the line.

As an add on, try doing the swing-outs on a 30 or 45 degree angle, or change the Tandem Charlestons to be sideways and practice having the team match the line leader while running the routine.

Note that if you have two lines, each line will need a leader. Lines bigger than five couples will need two Line Leaders.

In almost all non-line formations, each couple will have a “buddy couple” who they should line up off of. See below for a few formation ideas. For formations below like the Tree, Spokes, the Artichoke, etc, you’ll have someone across from you to line up with.

A “Window” is my term for the space between two couples. Windows between couples should be equal, and never obscure the couple in the back row. Just as a team member can call out “Line!”, one can also call out “Window!” if the side-to side spacing is incorrect. I’ve notated formations where the windows are particularly challenging to maintain with a |—| symbol from the audience perspective.

This is a great and classic model for a team routine. 1) Do Lindy Chorus or California Routine, or partial choreography 2) Each couple does solos 3) Finish with Choreography. For spacing though, in general, the farther the audience is away from the performers, the more you’re going to have to move away from the soloing couple. Practicing “Jams” is important, as this will also be the default should the unforeseen happen (live music doesn’t match what you thought was going to play, many people forget choreography, the person hiring you asks for an extra performance on the spot, etc.) The attitude of the team is that the show must go on no matter what. Practicing jams ensures that “dead air” will never exist during a performance.

I’ll close with a page from my notebook, covering some basic formations. Like all things, the sky is the limit, but here are a few all teams should know right away. I think all dancers should keep notebooks handy at all times. Use your time on the bus, on airplanes, waiting at the doctor’s office or just lying in bed at night to brainstorm, without editing yourself or being critical of any idea to just innovate and “think big” for 5-10 minutes. As a few months pass, you will create notebooks full of good ideas to draw upon when your creativity is low.

This page covers basics, but if there is interest, I’ll post more formation brainstorms.

In our next installment, the California Routine! 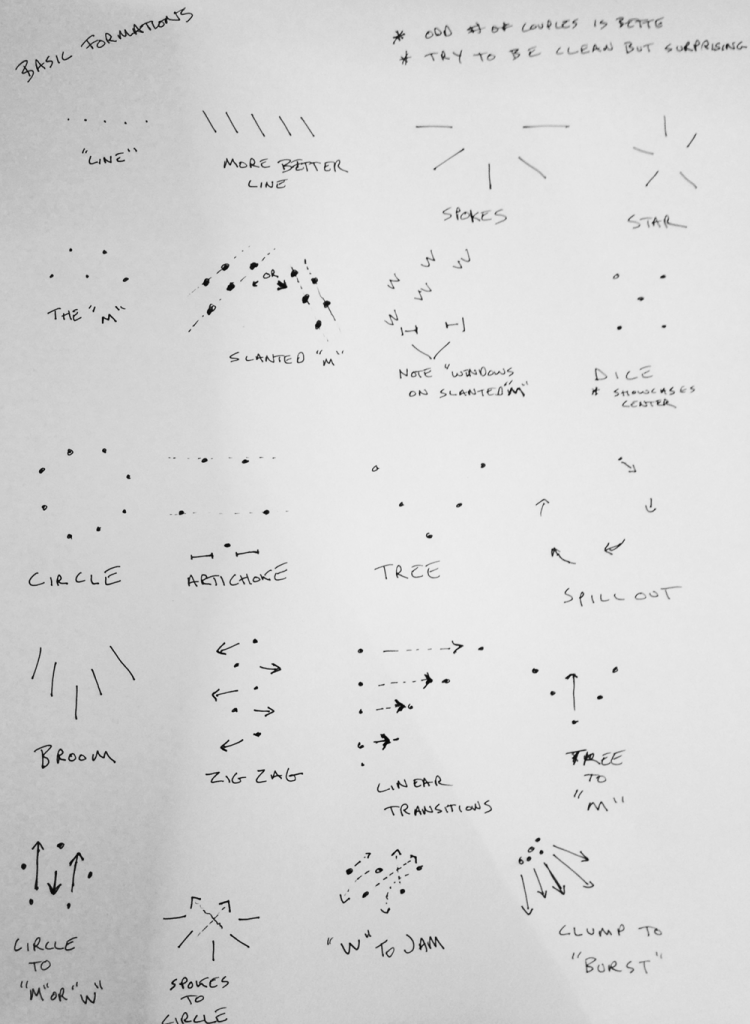