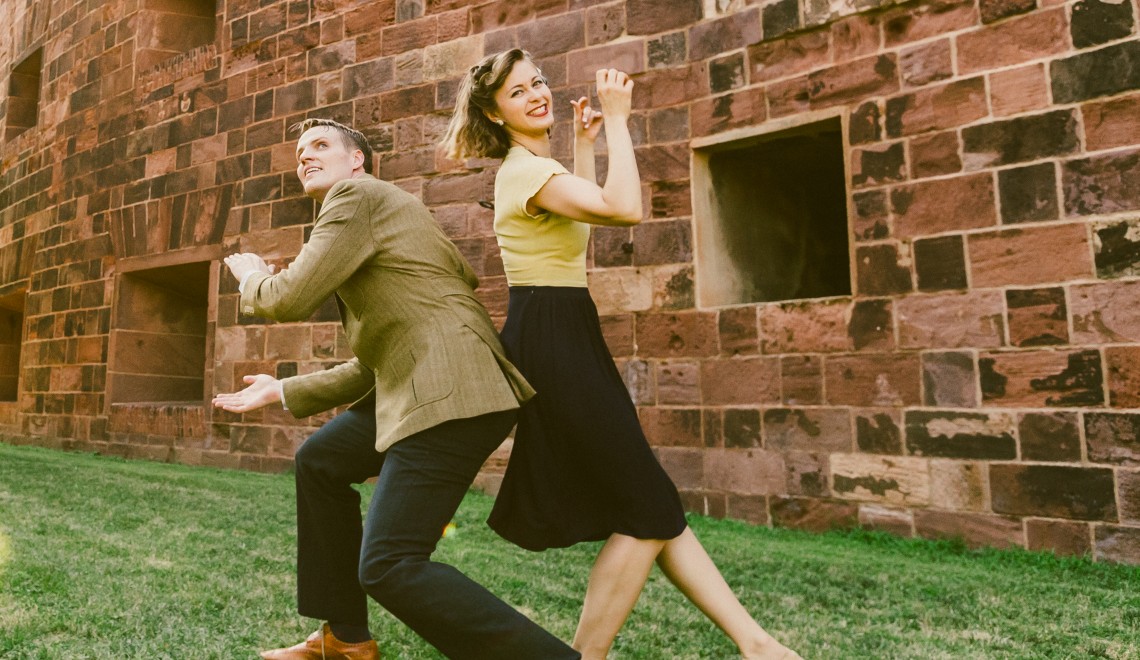 For the next installment of my series on running a swing dance team, I’d like to cover The Big Apple. The Big Apple is a standard among Lindy Hop dancers world-wide and is another routine choreographed by Frankie Manning. Although Frankie is no longer with us, thousands of dancers will be celebrating Frankie’s 100th birthday in May of 2014. It’s almost certain that the Big Apple will be danced many times that weekend at parties all over the world, so if you haven’t learned it yet, by all means I recommend it.

The term “Big Apple” in the greater context refers to a style of dance done in a circle, associated with religious observance as early as the 1860s. According to “Blues People” by Leroi Jones, at this time the only acceptable place for dance within the African-American community was through religious observance. Later, with the rise of Jazz music, similar forms of dance (circles, large arm movements, rotation, actual shouting) were observed in southern nightclubs, most notably at the Big Apple nightclub in Columbia, South Carolina. Due to a few curious college students observing this dance at the Big Apple club, the dance traveled North during 1937 and ’38 and was soon in shows, dance schools, and more.

At the time, it probably looked a little something like this, with a caller shouting out moves that either one couple or the group would then execute.

If you want to dive into the history a bit more, check out this neat interview with Betty Wood, an original Big Apple dancer: Click here for the interview

When it comes to the “called style” of Big Apple, nowadays, Peter Loggins and Mia Goldsmith as well as Lance Beneshik teach this early style, and a number of the calls used. Some cross over into commonly used moves like “Truckin'” and “Applejack”, but in this version there are many character moves like “Frankenstein” etc. Fun stuff! It’s worth doing a class with one of these fantastic teachers if you can.

For a swing team, in particular, the version we’re going to tackle is from a move called “Keep Punchin'”. Herbert White, or “Whitey”, the manager of Whitey’s Lindy Hoppers, sent Frankie Manning a telegram in California where he was working on a film and described the dance. Frankie had spent summers as a youth near Columbia, South Carolina, and though he had never seen the version Whitey described, he had some context and put together a version using all the common swing jazz moves in use at the time, plus some unique transitions.

Frankie put together the routine for a show touring Australia called the Hollywood Hotel Revue. Legend has it that at once upon a time, while preparing for the show, Whitey’s Lindy Hoppers were called out of rehearsal and cast in a Jitterbug contest. The result is this classic clip:

The artist playing the song has never been successfully identified to the best of my knowledge, but Solomon Douglas Swingtet did a fantastic rendition in superior sound quality which you can buy at //www.cdbaby.com/cd/sdswingtet. There is also a rip of the movie audio going around. You can ask your DJ friends, but they might pretend not to know what you’re talking about. Try some social lubricant (aka buy them a drink) and try again in 20 minutes. Though, I strongly recommend the Solomon Douglass version for any kind of performance. The sound quality will help your team stay on beat. For variation try another song altogether. Wednesday Night Hop by Andy Kirk and Flyin’ Home by Lionel Hampton are great, and for situations where a modern twist is more appropriate you can use Casey Macgill’s “Rhythm”.

So why do we tackle such a long and complex choreography next?

1) Some of your dancers will probably know this already. Many might not. At the end, everyone will have a reason to practice a ton of jazz steps, and you can iron out things like proper Suzy-q’s, good Shorty Georges, etc.

2) The dance is done in a circle, so your less experienced dancers can watch several other dancers at once for a good example.

3) It’s an easy way to put together a quick performance. For instance
Big Apple up to the arm lock
Jam style until the last phrase
Finish with California Routine.

4) Use the Big Apple as a basis for new routines. For an example, see what Dax Hock did here with his invention the “Fuji Apple”

6) You can teach your team some good stage principles. A few of my favorites include exaggerating expansion and contraction of circle formations when that takes place. More stage movement equals better audience engagement. Re-enforcing the importance of holding formation (call people out when they don’t fill in gaps, or when they make the circle an amoeba. A good team should be able to manage a circle.) You can reorient moves at your discretion to face people “out” to the audience instead of “in” as a variation for stages. When rotating the formation, go faster! Use entrances and exits to make eye contact with audience. Teach each member that it’s their job to be the most exciting one on stage and practice it that way every time the music comes on.

7) It’s fun to do at dances and events. There’s something really wonderful about being connected to the global Lindy Community with a few common choreographies.

8) It will cull the herd… In other words by doing an ambitious choreography right off, you’ll figure out who’s there to learn and be a part of the team – to work their asses off and make something worthwhile. You’ll find a drop-out in those who won’t take responsibility for their learning and dancing, and aren’t ready for the team environment which is decidedly more of a collaboration than a class (when you’re doing it right).

9) Lastly, and probably most importantly, is using the Big Apple as a tool for developing dancers as opposed to people who can execute choreography. Let me explain… As we as a team dig into the routine, if you are in the position of coaching, I recommend working this routine in a way that everyone’s RHYTHM is the same, but not everyone’s STYLE has to be the same. For instance, go back to the original Keep Punchin’ Big Apple, and watch the Suzy-qs, and Frankie’s little jump up in the middle. Watch the different hand positions in the boogie forwards. Check out the styles in the Spank-the-babies, Rocks, and Jump Charleston. Give a few suggestions but encourage the team to find their own individual style. Try to make sure the team’s variations looks classic, as opposed to being influenced by later styles. There are easily hundreds of ideas in this clip alone, so being creative is an option, but every vintage clip is also a goldmine… there is so much information there. Challenge your dancers to think of or discover at least 5 ways to execute a move. Sure there is a time and place for precision, but developing style is important too.

Have I convinced you yet? If so, then we need to carve out realistic time goals. This routine is going to take a few sessions to master. It’s better to work it for an hour over 4 weeks, than to cram it all in one practice. If you are a jedi-master Lindy instructor and know this routine like your own telephone number, you can use a technique I call “upside down teaching”… in upside down teaching, you teach the last move first… then the next to the last, then second from last, then every time you practice, you are re-enforcing a stronger ending than beginning. Use wisely. This is the best way to throw a lot of choreography at your team, but it’s not for the faint of heart. Otherwise you can go phrase by phrase. I’m starting with a few videos of the entire routine in counts, and then some easier phrase by phrase breakdowns.

Dan and Lainey Review All Counts

For you written information types, Shesha over at Atomic Ballroom wrote the whole thing down for you:
//www.ocswing.com/pages/review/bigapple.pdf

Here is a sample of me performing this with my team from Denver – “23 Skidoo”. Look for some faces you might recognize in there like Kenny Nelson, Teni Lopez-Cardenas, Joe and Nelle Demers, and Marty Klempner.

This routine is a must have for all teams.. Make it your goal to be exciting, engaging and carry the “Spirit of the Jitterbug”, even in the more commonly performed routines.. It ain’t whatcha do, it’s the way that you do it. Next on the agenda – The Lindy Chorus!