Running a Swing Team Part 9: Things I learned this year

If my life were ever to flash before my eyes, the montage would be filled with an awful lot of memories from running different teams throughout the years.  As you can imagine each year is filled with some lessons from the past years, and a few experiements as well. Rain City Rhythm has been one of the most satisfying teams for me, and this year was indeed one of the better years.  We tried a lot of things, figured out a lot of things, and laid the foundation for better things to come.

In the bigger picture of the world at-large, 2016 was a big year. Among other things, we lost Dawn Hampton and Dean Raftery.  Every passing icon is a reminder of how everything counts. A reminder of how things like jobs and money come and go, but time only goes, and the times with our friends and mentors is always too short. As someone who has been dancing for 20 years now, I find an incredible sense of responsibility to keep providing inspiration, practice spaces, dance events and information to a new generation.

One of the most significant (in terms of time and net results) ways that I do this is through teams.  To be on a team is a commitment to be involved.  It’s a commitment to practice every week and develop your own skills, but also to inspire others. It’s an admission that you know that you will have ups and downs but by making the commitment you will stay committed and hold on to your passions through the downtimes. It’s a gift of yourself to bring your friends along with you in your successes and your journey. I do teams to find real moments of human connection. My teammate Aaron put it best when he said this year (and I paraphrase) “We’re not just a team, we’re a tribe.  When we win, we win together, when we suffer, we suffer together.”

And this year we won some and we suffered some. This year was the second year of Rain City Rhythm, and so many positive things happened for us, as well as many negatives.  The net result, however, was that we experienced much positive change.  I’ve often said that it takes about 3 years with a team to go from the initial concept to placing at competitions.   It takes that long to find and train the right people and to structure your team in a way that works for everyone. Here are some of the things we tried this year.

We found a tattoo artist to design us a logo.  It really reflects the vibe of Seattle.  Yep, thats a rain cloud spitting fire. We had them made into patches.  Logan Chinn had the amazing idea of ordering the patches not as “iron on”, but the kind that had to be stitched on only, so each team member would have to think about how much they love team with each stitch.  Hardcore. 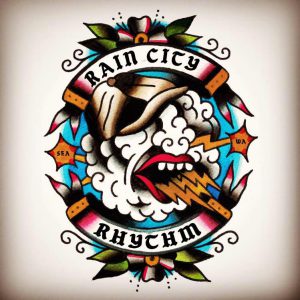 One thing I always found a bit oppressive about running a team is that it’s every single week, without a break.  So this year we’re trying to have one practice a month be a “community night.”  We either go out and learn another style of dance, volunteer, or otherwise contribute to the community. For instance, we volunteered at the YWCA’s Adopt-a-family this winter and handed out presents and donations to families in need. It was a really winderful way to spend a half of a day.

Using Facebook’s new “documents” feature we were able to collaborate on how to divide up practice.   One thing that really worked well for us is 30-40 minute blocks (I used to do one-hour blocks).  That way we could move at the speed of advanced dancers, more people could contribute, and the individual teachers didn’t have to prepare a full hour of material.  It would often look something like this: 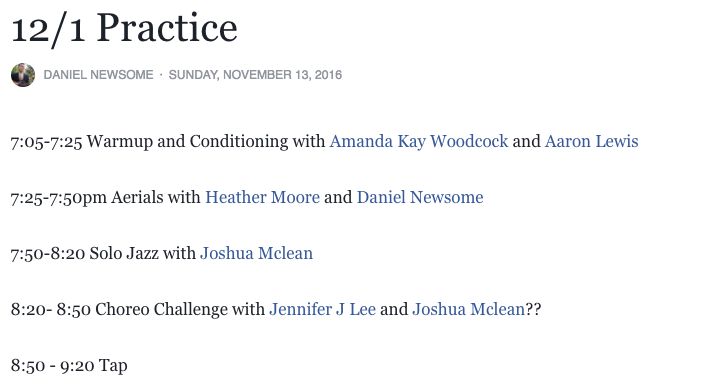 We got better at social media

//www.facebook.com/RainCityRhythm/ is our Facebook page and //www.instagram.com/raincityrhythm/ is our new Instagram page.  It helped us get gigs.  We shared the passwords / admin responsibility and everyone helped with posting and updating. It helped us keep our families and friends up to date with what we were working on.

We redesigned the way we did auditions

One of our biggest changes was that instead of running a one time audition, we ran a month-long ‘audit’.  Anyone could come and practice with us for a month, and at the end of the month, we analyzed, voted and extended invites.  This allowed us to do a few things: 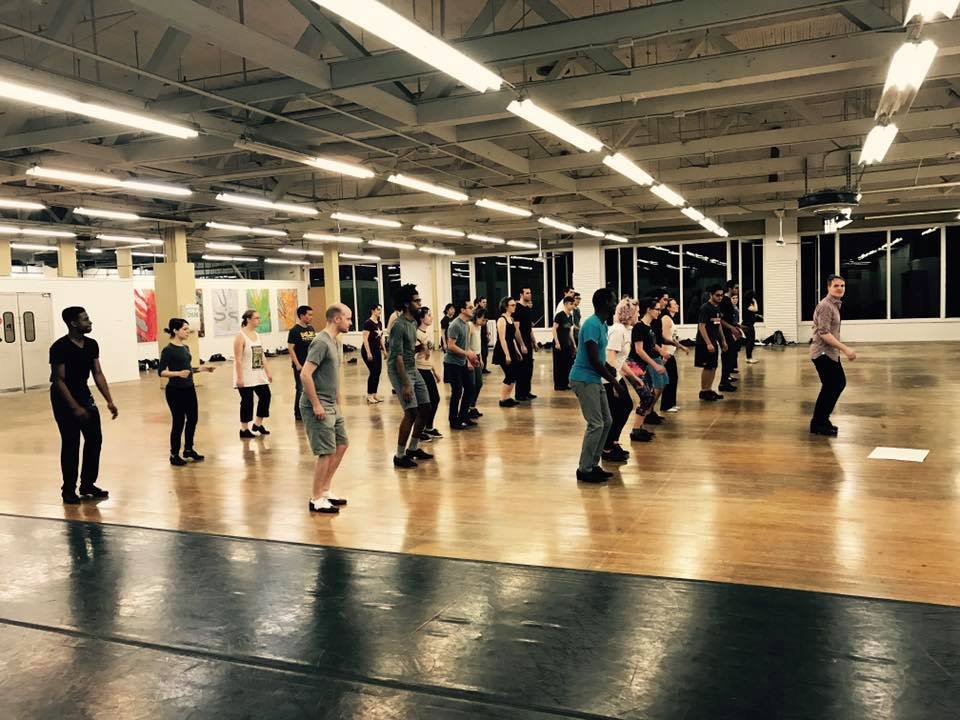 We did photo shoots!

Photo shoots are a really fun way to catalog and remember your times as a dancer. 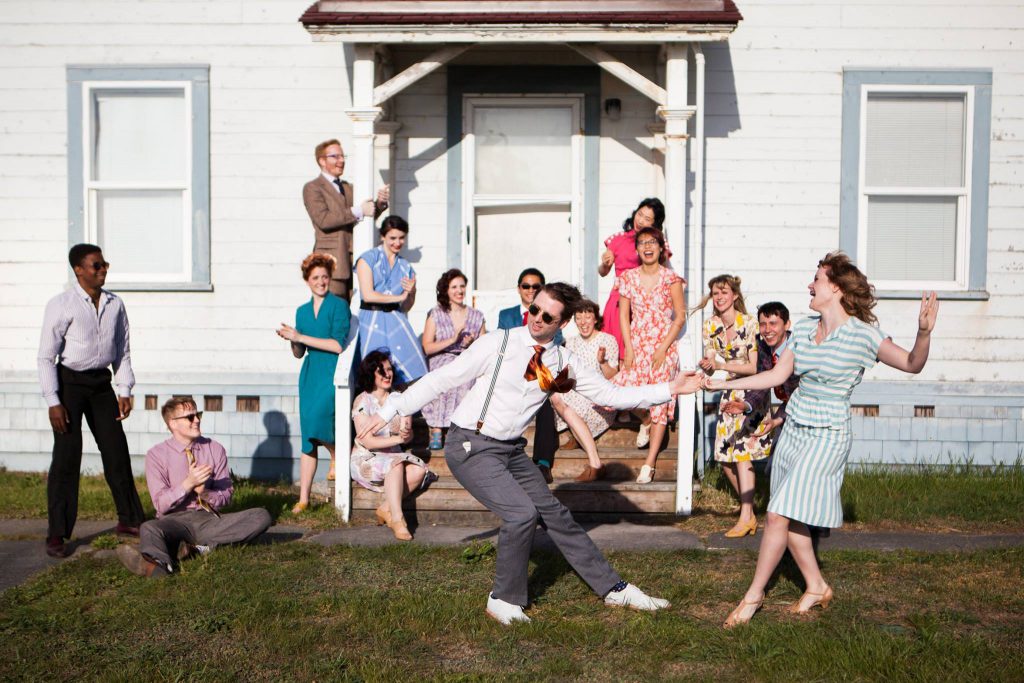 Some advice for team looking to do photo shoots 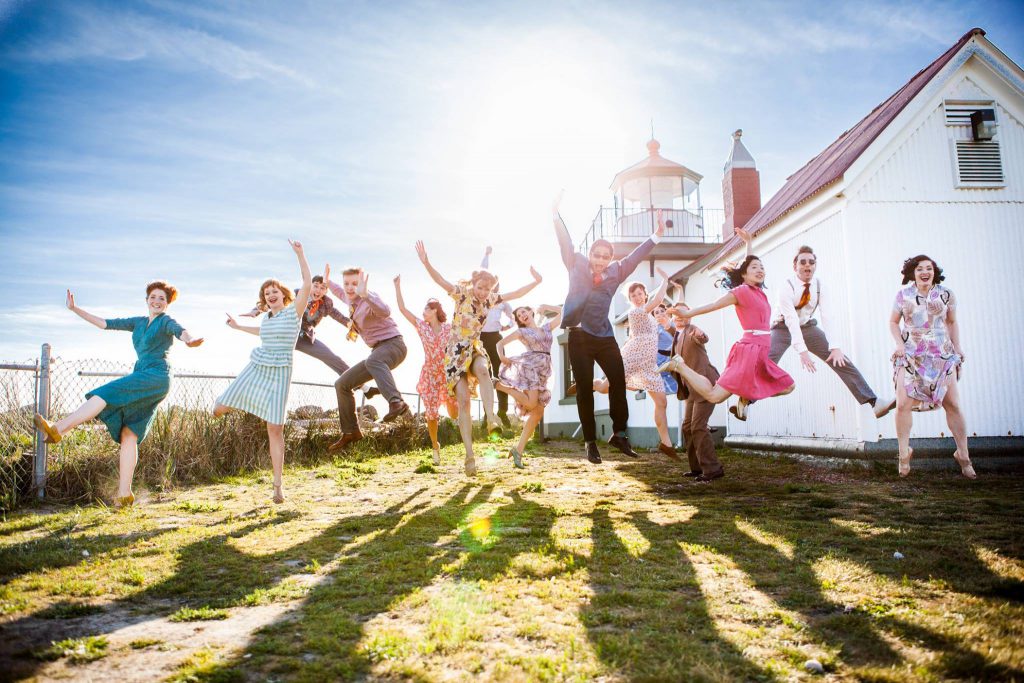 We took pictures at different events

We have a tradition.  “Before we get sweaty, let’s take a picture”… we didn’t always succeed, but we got to remember some fun times. 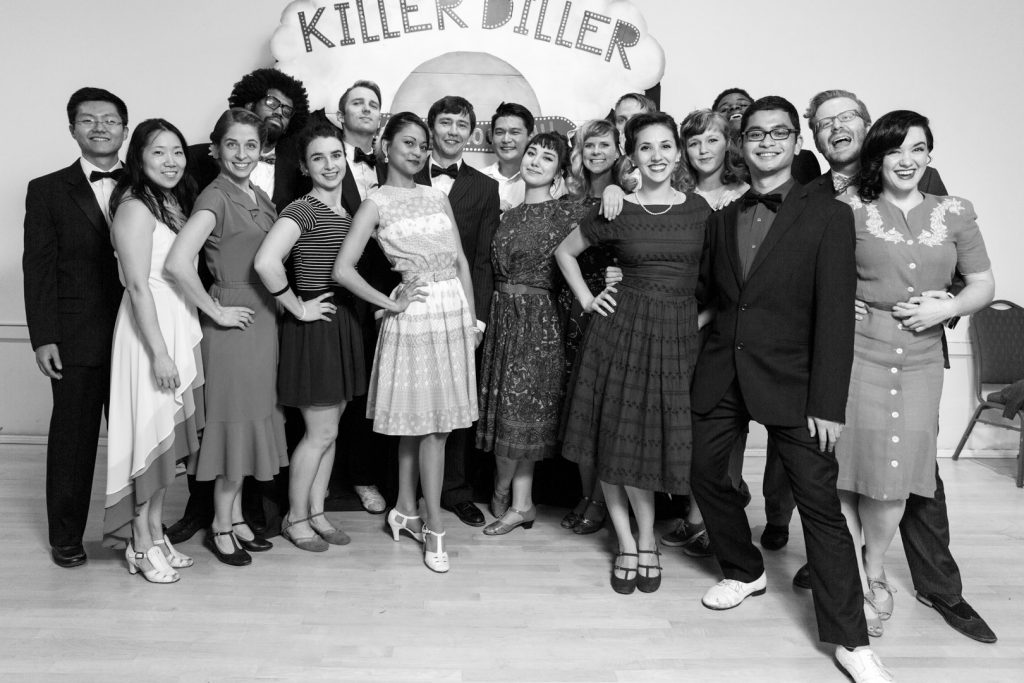 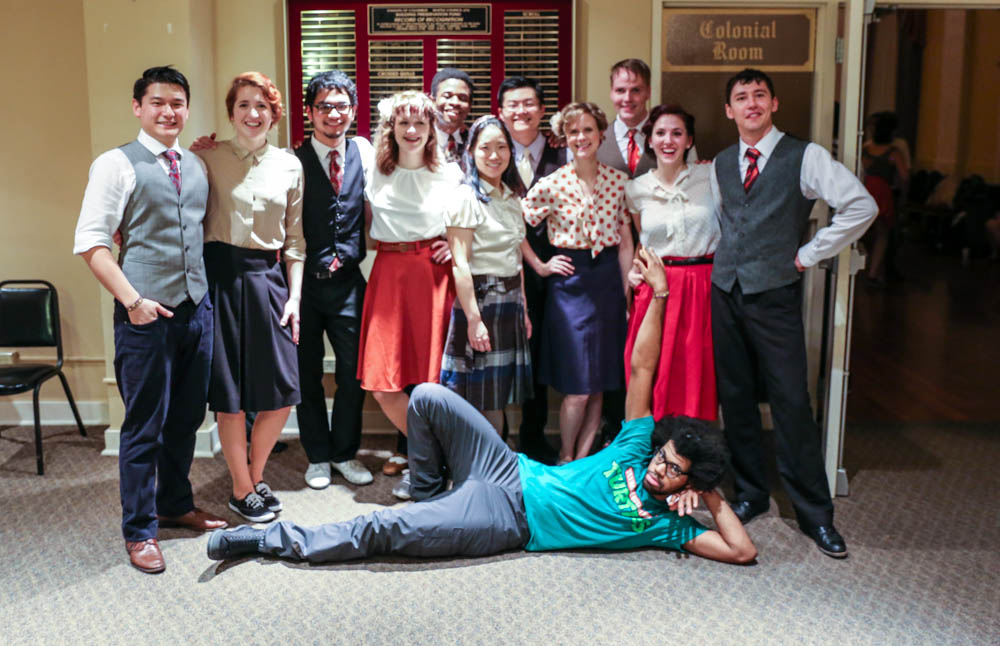 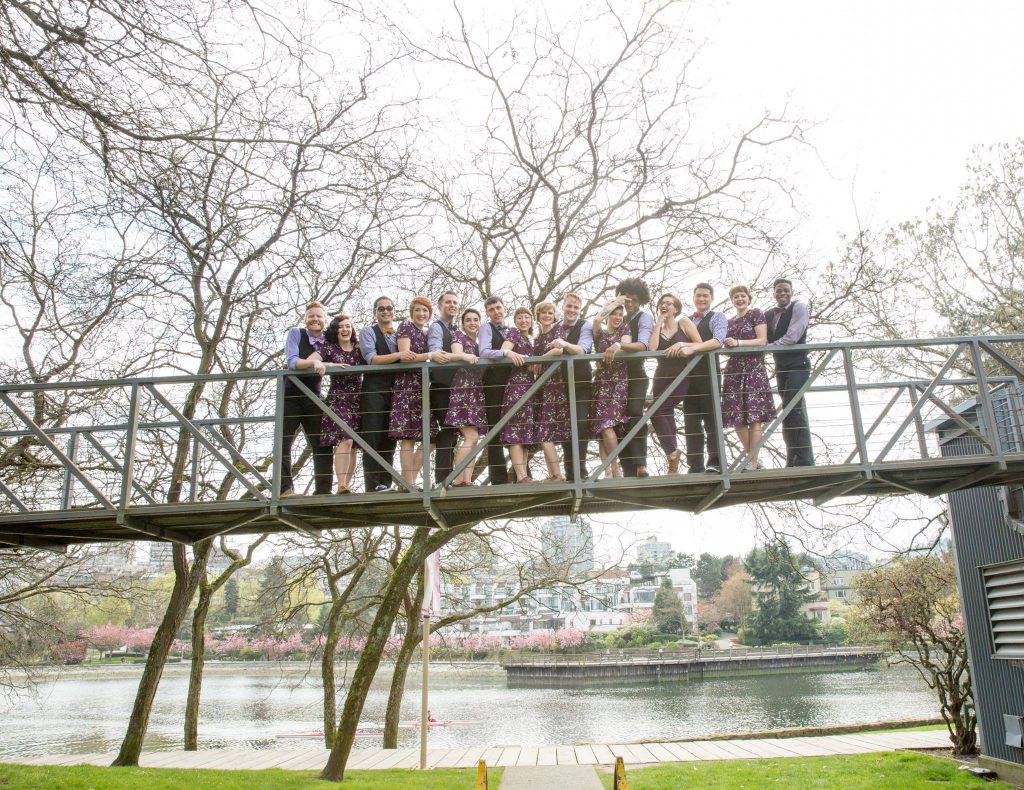 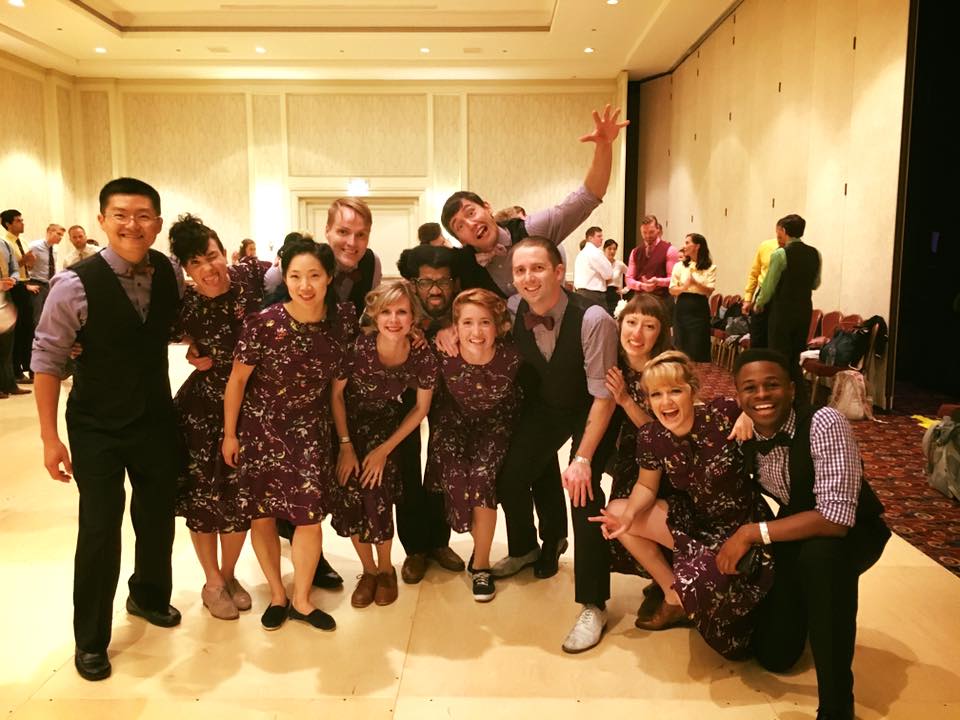 Because we had better social media we were able to contact more people. We added several gig routines, like the Aurthur Murray Shag Clip, some electro-swing pieces (the client isn’t always right, but they are the client….) 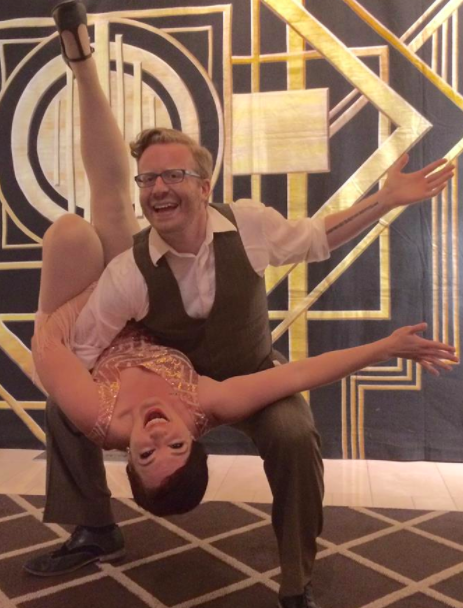 Lee and Heather about to Electro-swing the night away 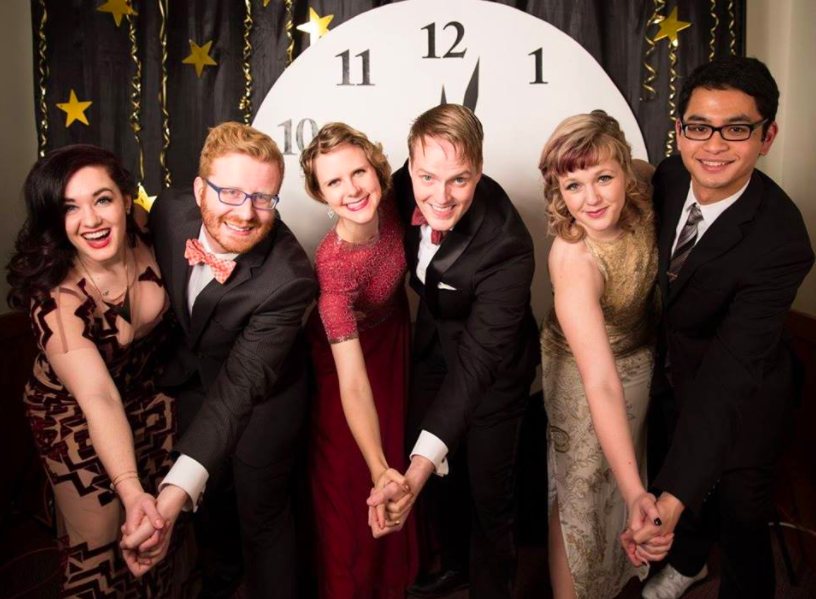 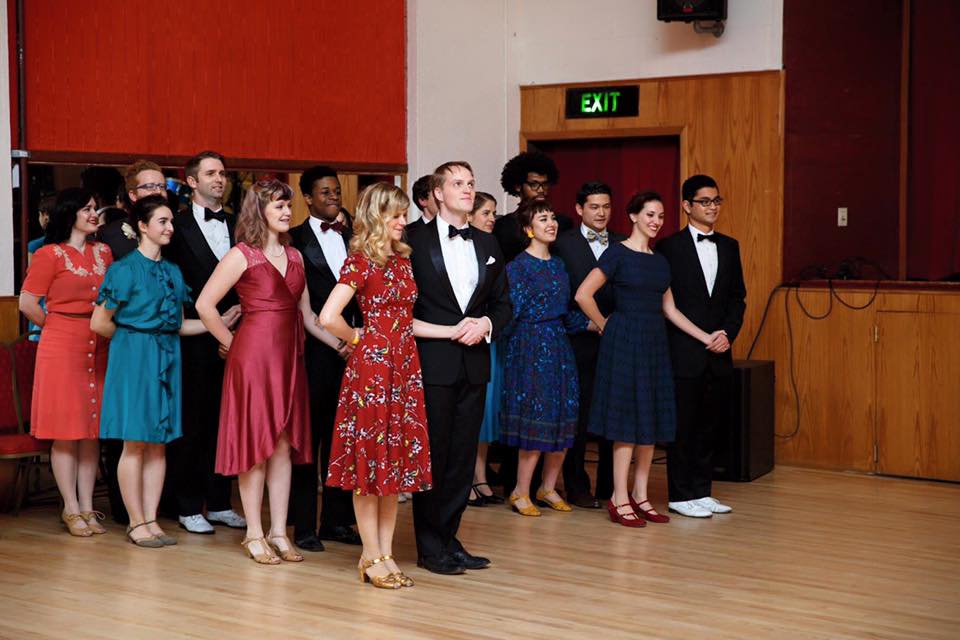 We got better at conditioning

As our aerials program got more in-depth, it became more important to continue keeping our bodies in good condition.  We focused on plyometrics (jumping and explosive power), agility (changing directions and fast feet) as well as core strength. 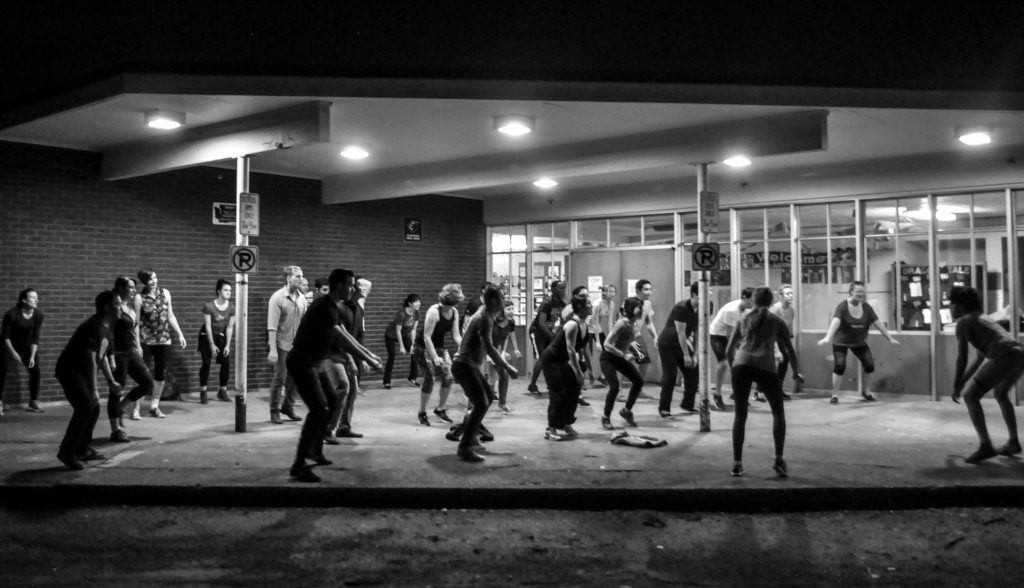 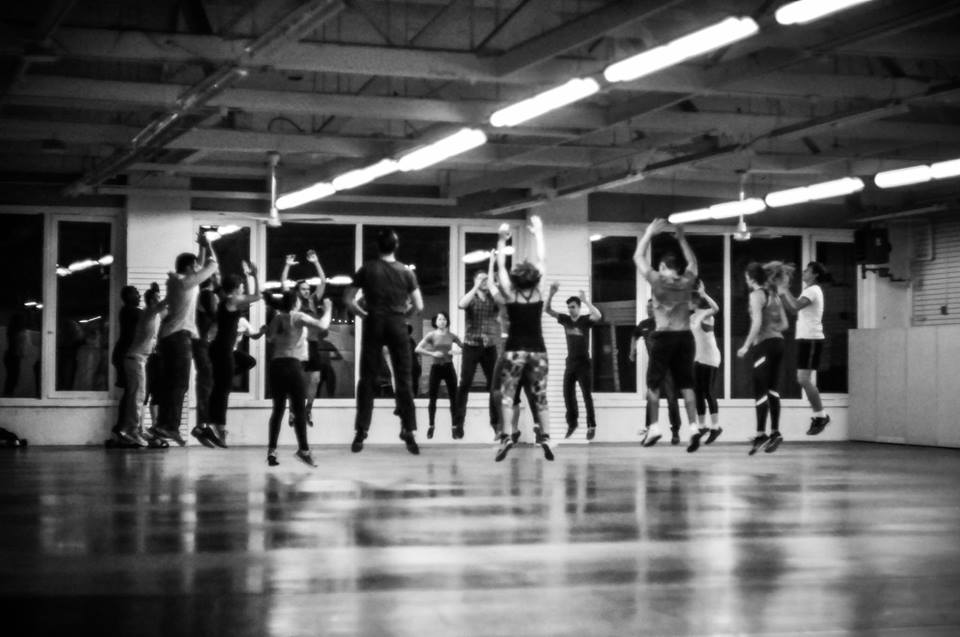 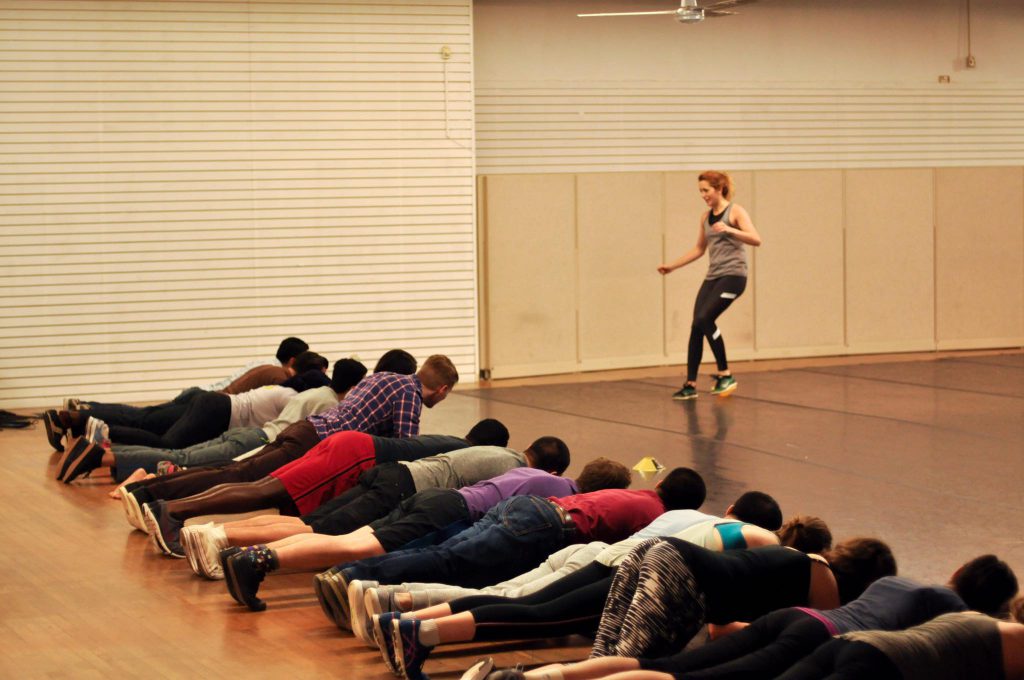 You might also be interested in my post on Team Movie Night. Often particular segments were based around various dance icons, and it was helpful to see the original dancers on film. 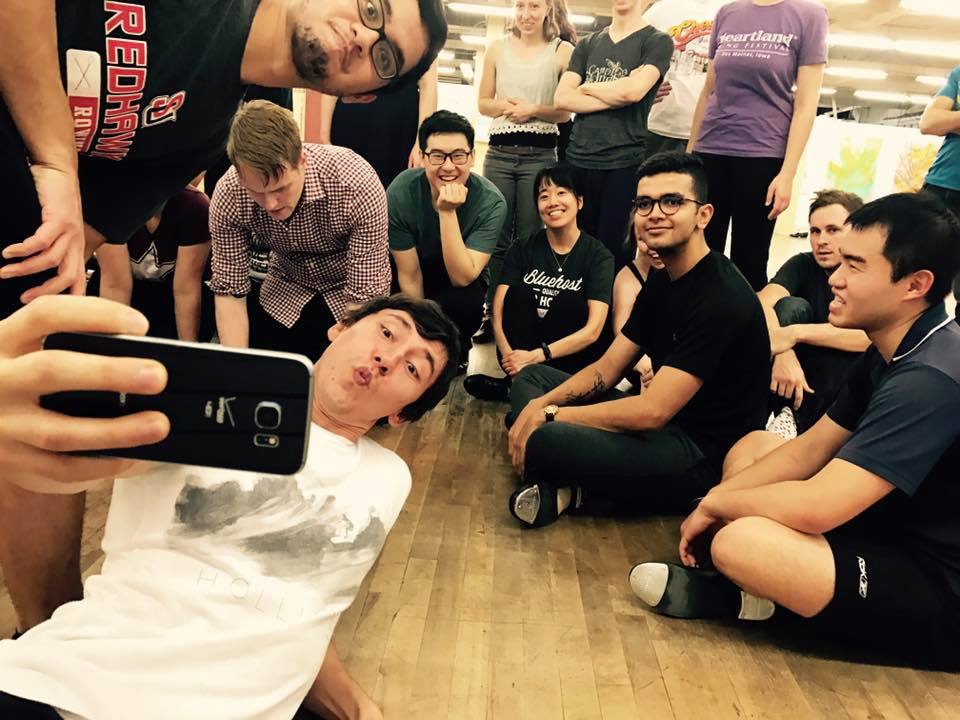 We did more tap

Tap teaches rhythm, and it teaches how to learn choreography quickly.  It’s been a great source of inspiration, and it’s history is deeply rooted in the Jazz Renaissance just like Lindy Hop.  I highly recommend that any swing dance teams to integrate tap. 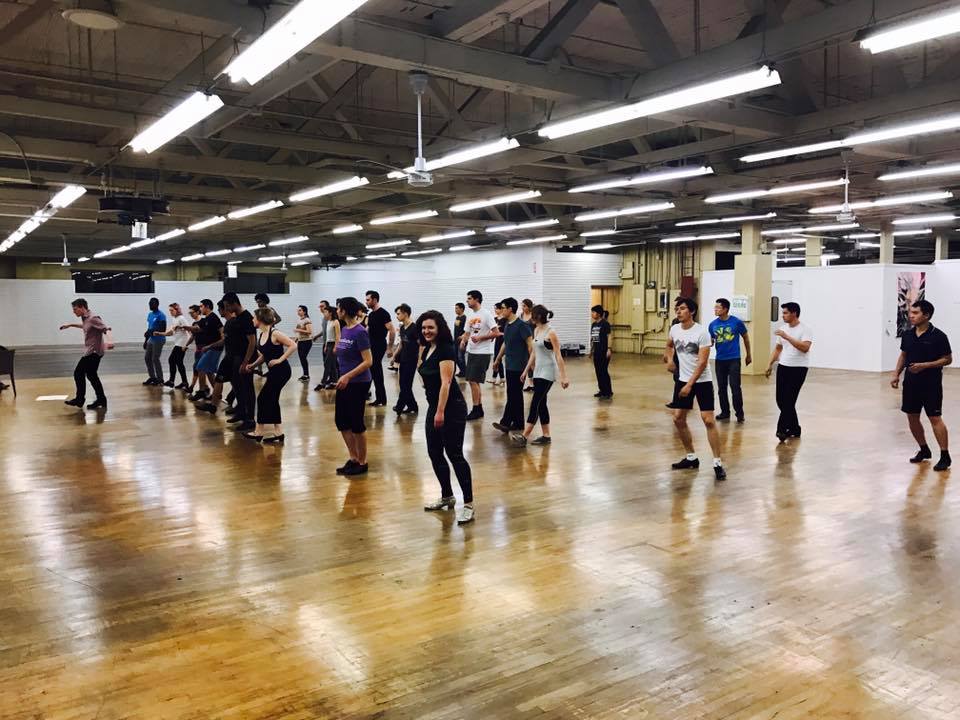 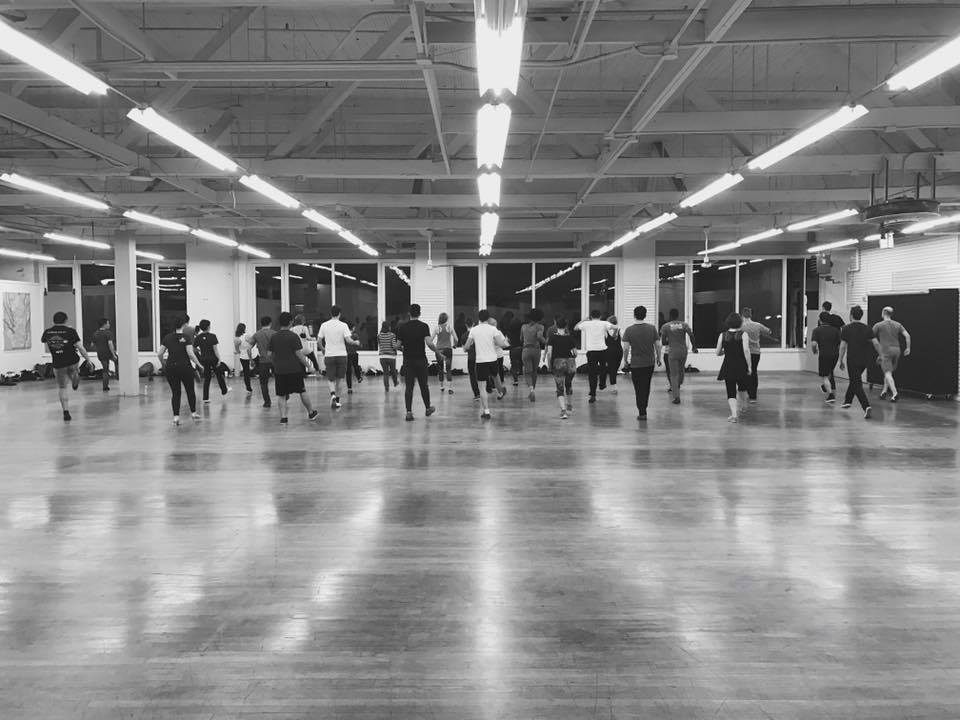 We did more team hangouts

Team hangouts became more of a thing for us this year.  Potlucks are my favorite. 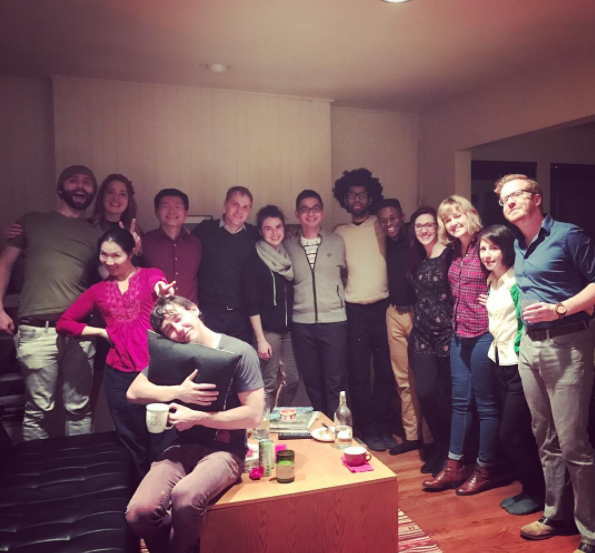 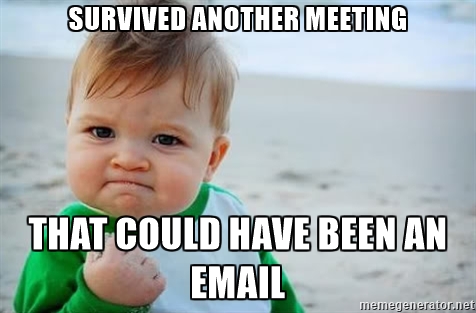 Anyone who knows me knows how much I dislike meetings.  However this year I learned to love them (*cough* or at least tolerate them)

This year, when we had team meetings, I made sure to hear from everyone, not just the most vocal members. We actually went around the table one by one, and some of the best ideas came from people who otherwise would not have spoken up.

We limit our meetings to being quarterly, in general, but sometimes special circumstances merit an extra one.

We got a lot out of these.  Changes in general direction, airing of grievances, and often times much different feelings about a topic than I would have otherwise intuited.

One thing I’ve always held fast to, however, is that practice time is only practice time.  We never have meetings during or instead of practice.

In conclusion, a great year

“No matter what happens outside these walls, let there only be love within them” is my motto for each practice. I’m excited to see what next year brings.

If you’re also on a team, I’d love to hear your suggestions below.  Add a comment!